Great Leader chatter about Obama healing the nation is engulfing every network news station — including Fox — following the mass killing in Connecticut.  Was it always this way?  I’m thinking back on Columbine, David Koresh, Oklahoma City — is anyone else getting nostalgic for mere partisan political jabs in the wake of grim and senseless violence?  There is something profoundly creepy about the bureaucratic/therapeutic/paternalistic vibe emanating from Washington.  Of course, this is part of the Department of Justice’s ongoing efforts to expand their mission beyond crime control . . . to social control.  Flying under the flag of “anti-bullying,” “hate hurts,” “restorative justice,” and “prisoner re-entry,” the Department of Justice continues its Great March behind the Great Leader into people’s lives, this time using the excuse of a nut with a gun.

The goal isn’t merely gun control.  Gun control is a speed bump on the way to social control. ...

The Office of Justice Programs of the Department of Justice is busy promoting Vision 21 Transforming Victims Services, the DOJ’s sweeping “new” agenda for providing “services” to victims of crime.  I’m using the scare quotes here because I don’t trust Eric Holder to do anything about crime other than politicize it. 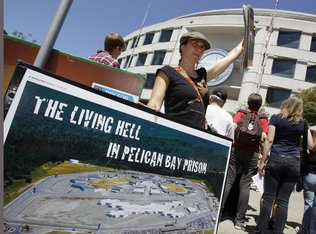 The hunger strikes at several California prisons this summer may have seemed like spontaneous uprisings against torturous conditions.  That’s how many incurious souls in the fourth estate are portraying them.  To wit, this hand-wringing Washington Post editorial highlighting the “tragic modesty” of prisoner demands:

DOZENS OF INMATES at California’s Pelican Bay facility went on hunger strikes for several weeks this summer for what seemed like pitifully modest demands: “Allow one photo per year. Allow one phone call per week. Allow wall calendars.”  What would prompt such drastic measures in the quest for such modest goals? Answer: The protest was an exasperated and understandable reaction to the invisible brutality that is solitary confinement. Some of the Pelican Bay inmates have been held in “security housing units” for years; those tagged as gang members can expect to stay there for six years, with no certainty that they will be reintegrated into the general population even if they renounce gang membership.  When an inmate is holed up alone in a cell for up to 23 hours a day with no meaningful human contact, a photograph of a loved one or a weekly telephone call can help to forge a connection with the outside world. With little or no exposure to natural light, a calendar can help forestall losing all track of time, all sense of reality. These simple privileges, in short, can help ward off insanity. ...

Thanks to cost-cutting, or rather, thanks to the fact that there are lots of criminals in California, Los Angeles County is going to have to provide jail beds and parole supervision for 7,000 additional inmates a year who would have otherwise been sent to state prisons.

In the L.A. Times, County Supervisor Michael D. Antonovich had this to say: ...

Ablanedo’s family has been waiting for Powell’s appeals to end for 32 years.  They have endured a lifetime of watching Powell be cast as some type of especially sensitive, peace-loving man as he manipulated the legal system — a spectacle they were forced to subsidize with their taxes. ...

“Michelle & Barack & Bernardine & Bill: The Real Story of the Obamas and the Terrorist Couple”

And How Chesa Boudin Was Involved